What is Dressage & Beginner's Guide to Showing Dressage 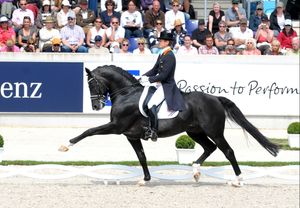 Dressage is a discipline of horsemanship that creates a highly refined and harmonious relationship between     horse and rider. While dressage literally means "training" in French, it is so much more than that. In Dressage, the horse and rider create a bond that enables them to communicate seamlessly through the rider's aids (use of the rider's hands, weight, legs and seat to influence the horse) thus creating a ballet-like dance. To the average person, these aids are nearly imperceptible, which makes it appear as though the horse is performing on his own and the rider is simply a passenger. At the upper levels, the horse and rider have all but mastered the art of non-verbal communication. The horse willingly performs the highest of difficulty tasks asked with amazing beauty, style and grace.

Originally evolved from cavalry movements and training for the battlefield, today's dressage exhibits many of the training practices, skills and maneuvers present in classical dressage founded over 2000 years ago. The success of training is demonstrated today through Dressage Levels and tests in which the horse and rider perform a series of movements within a standard 20m x 60m arena. Judging of these movements is based on the "level" of test and the standard appropriate for that particular level. Scores are based on a 0-10 scale with a zero being "not executed" and a ten being "excellent." A horse and rider are not considered ready to progress to the next level until a score 60% or higher is achieved in all requirements. It is imperative that competitors exhibit at least this level of proficiency before progressing to the next level.
In the beginning stages of Dressage competition, a horse and rider are evaluated at the Introductory Level which requires the horse and rider to perform a series of movements transitioning at the walk and trot. From here, horse and rider progress to the Training Level, and then First Level, Second Level, Third Level and Fourth Level. Upon successful completion of the lower levels, the horse and rider are ready to perform at the FEI (Federation Equestrian International) levels of dressage consisting of Prix St. Georges, Intermediare I, Intermediare II, and finally the highest and Olympic level Grand Prix. There is also the Grand Prix Special. 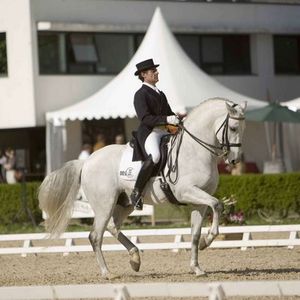 Musical Freestyle or Musical Kur is a form of dressage where horse and rider "dance" to music. Movements and figures are choreographed to meet the technical requirements of the particular level with carefully chosen music that highlights the horse/rider combination. Musical Freestyles are a creative expression of the relationship between a horse and rider, are highly entertaining, and offer great audience appeal. In the United States the tests are offered from First to Fourth levels through the USDF and at Prix St. Georges for Young Riders, Intermediate I and Grand Prix through the Federation Equestre Internationale (FEI). 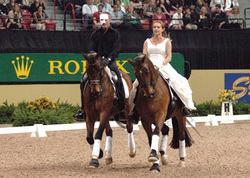 Pas De Duex is an equestrian dressage performance involving two horses. Movements and figures are choreographed to meet the technical requirements of the particular level with carefully chosen music where the two horses mirror each other and do the exact same movements next to or across from each other.

Quadrille is a choreographed dressage ride performed to music, which is often compared to an equestrian ballet or to a drill team. A minimum of four horses are used, and perform movements together. Quadrille may be ridden as a performance, such as those given by the Spanish Riding School, or as a competitive test with judging.

What is the Dressage Training Pyramid?

The training pyramid is a template for training the Dressage horse. As a horse progresses through its training, the levels are structured as a means of improving the current level. If a previous level is not refined, mastery of the proceeding levels is impossible. Each level of the training pyramid is both
inter-dependent and inter-woven, and often, the lower rungs are revisited to check that progress is genuine and that the horse is fulfilling all the preceding requirements. 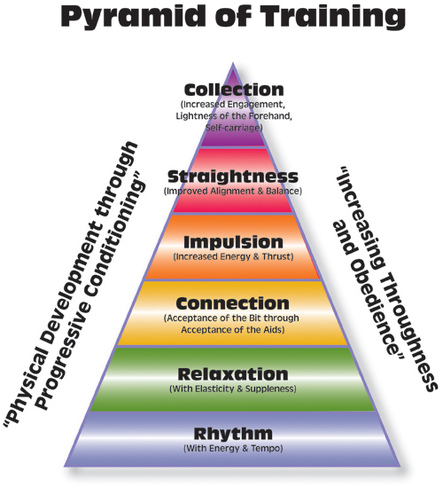 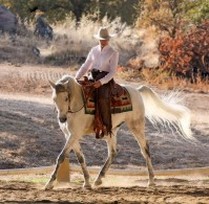 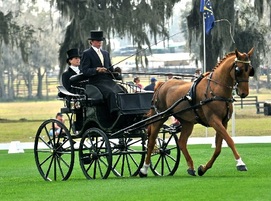 Driven dressage is dressage in harness. As with regular dressage, driven dressage competitions demand a high degree of training, suppleness, obedience, and safety. In all paces and movements, the horses must be on the bit and correctly positioned. Cadence and impulsion must be retained throughout the test. Driven dressage, despite not being as well known as other sports, is an FEI recognized sport, with the FEI providing international level tests. In America, the American Driving Society controls and provides all driven dressage tests.

The object of Driven Dressage is the harmonious development of the physique and ability of the horse. Through progressive training the horse becomes calm, supple, and flexible as well as confident, attentive and keen in his work. These qualities are revealed by the freedom and regularity of the paces; the harmony, lightness and ease of movement; the lightness of the forehand and the engagement of the hindquarters, originating in a lively impulsion; and the acceptance of the bridle, without any tenseness or resistance. The horse, confident and attentive, submits generously to the driver, remaining straight in any movement on a straight line and bending accordingly when moving on curved lines. His walk is regular, free and unconstrained. His trot is free, supple, regular, sustained and active. Because the horse has impulsion and is free from resistance he will obey without hesitation and respond to the various aids calmly and with precision, displaying a natural and harmonious balance both physically and mentally. In all his work, even at the halt, the horse should be on the bit. A horse is said to be "on the bit" when the hocks are correctly placed, the neck is more or less raised and arched according to the stage of training and the extension or collection of the pace, and he accepts the bridle with a light and soft contact and submissiveness throughout. The head should remain in a steady position, as a rule slightly in front of the vertical, with a supple poll as the highest point of the neck, and no resistance should be offered to the driver.

The American Driving Society (ADS) Driven Dressage Levels are: Training Level, Preliminary Level, Intermediate Level, and Advanced Level. The tests must be driven from memory, except in training level tests, where the test may be called.

An Introduction to Schooling Dressage Competition

Riders new to Dressage sometimes have many questions and concerns surrounding entering and competing in their first Dressage show. This is a guide intended to help anyone new to competition and will hopefully answer commonly asked questions.

What is a schooling Dressage Show?
Schooling Shows (un-rated shows) have no membership requirements. They are usually run as a learning situation for horses and riders. Show attire can be less formal, costs will generally be less, and sometimes a more lenient application of the rules apply. Competition Clinics also fall into the schooling show category. You are asked to ride a test, then get helpful feedback from your judge and then have an opportunity to re-ride your test again. These shows are a wonderful introduction to showing dressage, without the pressures that the rated shows may cause to a novice horse or rider.

A Beginner's Guide to Showing Dressage

Before the show:
It is very important that you know the rules of Dressage competition before you enter a show. Taking a lesson or two with a knowledgeable Dressage Riding Instructor is a very good idea prior to entering your first show. This will enable you to gain knowledge of the rules and requirements of competition and help you really enjoy your showing experience before the exciting day.

Entering the show:
After deciding which tests you would like to ride, you will need to fill out the entry form for the show you have chosen to participate in.

Closing Dates:
Make sure you know the closing date of your show. Dressage shows require advance planning in creating ride times for each entrant. The shows close one week before the show date. (the exact closing date is indicated in the show premium). The closer you get to the closing date, the greater chance the show will already be full and unable to accept your entry. The show organizers may accept late entries sent in after the closing date if there is room, but you will be required to pay an additional late fee per test as noted on the premium.

Ride Times:
Ride times are phoned to you, posted by email, or posted on the show website.

Formal attire:
The dress required at USDF Rated Dressage Shows. Riders dressed formally in competition, traditionally wear white or light colored breeches, a white shirt and tie or choker with a black colored jacket. Gloves may be white or black. For riders at the FEI levels, a shadbelly (tailcoat) is traditional. Except for very young riders, boots are black and come up to the knee. Except for very young riders, long hair is always tied up or in a hairnet with lower level riders usually in a black velvet helmet or derby style hat and FEI level riders usually in a top hat. Go to the USDF website for detailed dress codes.

Casual attire:
Requires the participant wear ASTM/SEI approved riding helmet and tall dressage boots or jodper boots (with or without half chaps). Although not mandatory, it is strongly suggested the rider wear breeches of light color (so that the judge may clearly see the rider's position), a neatly tucked in polo shirt with a belt and black or white riding gloves. Hair should be pulled back into a bun or carefully tucked into the helmet so that there are no visible loose ends.